Kevin Shwedo was appointed to the Governor’s Cabinet by Governor Nikki Haley on January 14, 2011 and confirmed to lead the Department of Motor Vehicles by the South Carolina Senate on February 10, 2011. Based upon the severe flooding in early October of 2015, the Governor directed that he temporarily step aside from his DMV responsibilities and lead the State’s Disaster Recovery efforts and synchronize Federal, State and Local resources.  The Executive Order tasked Shwedo with recommending short and long-term recovery efforts in areas of community planning, economic recovery, housing recovery and more. The role kept Shwedo busy for months, traveling to affected areas around the state to assess needs, attending town hall meetings to talk with locals impacted by flooding and performing countless other coordination duties.

Of her appointment of Shwedo to this role, Governor Haley said, “When it comes to response, when it comes to recovery, when it comes to logistics and when it comes to people, there is no one better who I can think of to be my point person than Colonel Shwedo.”   After his responsibilities as the state coordinator for flood recovery were finished, Shwedo returned to his role as the Executive Director of the SC DMV under the leadership of Governor Henry McMaster.

Prior to his appointment as the SCDMV Executive Director, Colonel Shwedo was the Deputy Commanding Officer of the United States Army Training Center at Fort Jackson. He retired from the United States Army in January with 32 years of service. During his career, he served in various leadership and developmental positions within the Army.

In previous assignments, he served as a project officer at the U.S. Army Infantry School and later as a platoon leader in the 197th Infantry Brigade. He moved to Germany where he commanded two infantry companies. Colonel Shwedo then taught leadership at the U.S. Army Engineer School for two years and later served as the Senior Combat Arms Analyst to the Director of Officer Personnel Management at the Total Army Personnel Command in Alexandria, Virginia. At Fort Carson, Colorado, he served as a Battalion S-3 for 2nd Battalion, 12th Infantry Regiment. Following graduation from the Command and General Staff College in 1991, Colonel Shwedo was assigned to Fort Polk, Louisiana and served as the Deputy Chief of Staff for the 5th Infantry Division (Mechanized), Battalion S-3 and Executive Officer for the 4th Battalion, 6th Infantry Regiment and the S-3 for the 2nd Brigade, 2nd Armored Division.

In El Paso, Texas, Colonel Shwedo served as the Director of Personnel and Deputy Chief of Staff for Joint Task Force Six. In July 1995, he moved to South Carolina where he took command of the 2nd Battalion, 13th Infantry Regiment at Fort Jackson. He then served as the Assistant Chief of Staff, G-3 for the 4th Infantry Division (Mechanized) during the Division Advanced Warfighting Experiment. After graduating from the Army War College in 1999, he was assigned to the U.S. Army Forces Command in Atlanta where he served as the Special Assistant and Speechwriter to the Commanding General of United States Army Forces Command in Atlanta, Georgia. Colonel Shwedo then successfully commanded the largest Basic Combat Training Brigade on the Army at Fort Jackson, South Carolina. Following command, Colonel Shwedo was reassigned to Fort Monroe, Virginia for duty as both the Chief of the TRADOC (Training and Doctrine Command) Commanding General's Planning Group, followed by selection to become the G-3 (Director of Operations, Plans and Training) for United States Army Accessions Command.

Colonel Shwedo and his wife Beth reside in Columbia. They have two children, Cameron and Ryan. 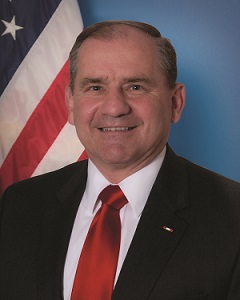