Captain Darewin Clardy began his law enforcement career in 1991 as he was completing his criminal justice degree at Central Missouri State University. He joined the Missouri State Highway Patrol in 1993 and was assigned to Troop A (counties surrounding Kansas City area) working in zone enforcement operations until 2009. In 2009, he was promoted to the command staff of Troop F (central Missouri troop). In 2019, he was promoted to division director over the Patrol’s Driver and Vehicle Safety Division, which is comprised of driver examination and motor vehicle inspection personnel. This position introduced him to AAMVA and its role in highway safety. Captain Clardy and his wife Amy reside near Jefferson City, Missouri. 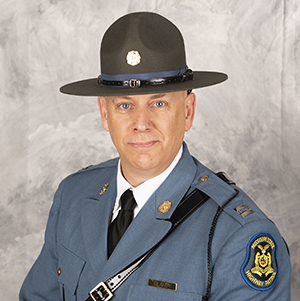