Superintendent Carter previously served 18 years with the state police from November 1984 until December of 2002 and was assigned to the Pendleton State Police post, where he worked in Hamilton County. (Hamilton County is now part of the Indianapolis Post.) He successfully ran for the elected office of sheriff of Hamilton County, serving two terms from January 2003 to December 2010. After leaving the sheriff’s department, Superintendent Carter accepted a position with the RQAW Corporation, an architectural firm specializing in the design and building of municipal buildings inclusive of jails, drugstores, police and fire stations and criminal justice facilities.

Superintendent Carter was raised in LaPorte, Indiana, where he graduated from LaPorte High School in 1980. He attended Ball State University and holds a Bachelor of Science degree with emphasis on Management, Leadership and Organizational Structure. He and his wife reside in Hamilton County, Indiana, and have one daughter. 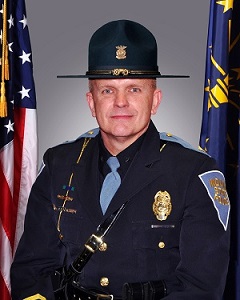